The Apple Watch is not a Fitbit wristband 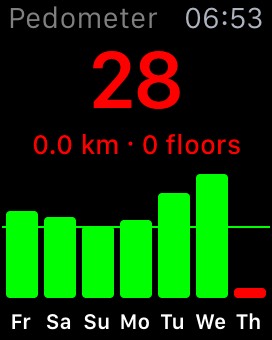 I've previously blogged about using the iPhone as a step counter together with the Fitbit app.

I had hoped that the Apple Watch could fit into this arrangement, but I'm afraid it doesn't. It does count steps, but not in a way that you can use with Fitbit challenges.

The pedometer data only comes from what the phone itself tracks. You can view it from the watch with e.g. Pedometer++, but the watch will not contribute any data.

The Health data comes from both the phone and the watch (if there are simultaneous steps, it only counts one source for that period, giving the watch priority).

The Fitbit app uses pedometer data – the data that only comes from the phone.

It does not, perhaps, make business sense for them to ever add it. The iPhone tracking seems a good way to hook users that then want a wristband (we've had a few of those at work) – but someone who can track steps on their watch might not be interested in their wristbands. On the other hand, a big community is inviting in its own right, so keeping Apple Watch users in the fold may mean more wristband sales to their Apple Watch-less co-workers, friends and family.

The Sync Solver app can sync data from Health to Fitbit, but these steps do not count towards challenges and only sync hourly among other limitations.

Thus I can't see a way to use the watch for Fitbit in a meaningful way – you still need to carry the phone around for tracking, or buy a wristband.