Project-wide search-and-replace in Vim with :Qdo

In my blog post about switching to Vim, I mentioned that I had yet to find a project-wide search-and-replace solution that I like.

Now I have: I use git-grep-vim for project-wide search, then vim-qargs to run a vim search-and-replace command over every result file.

I think it's unlikely that Vim will have a solution any time soon fully as convenient and well-integrated as in more modern editors. The per-buffer find-and-replace in Vim is dusted with enough special Vim magic that it won't match up perfectly with the syntax of project-wide search tools like ack, grep or git-grep. And in a large project, you need fast tools like those.

So while I don't know of a solution that is on par with the convenience of search-and-replace in other editors, I do consider this one more convenient than switching to another editor – for a while I used TextMate alongside Vim for project-wide find-and-replace.

And as usual with Vim, you get a lot of power you may not find in those other editors.

I use my fork of git-grep-vim for project-wide search in Vim.

It's based on ack.vim but uses git-grep instead of ack.

You can optionally specify one or several directories to limit the search to:

And pass in flags (-w makes it match only at word boundaries):

Add the results of a new search to the existing result list:

With multiple words or some special characters, quote the search string:

Or cheat to save some typing (the regex . matches any character, including a space):

As long as you're in a Git repository, I much prefer git-grep to ack. It's faster, and ack will ignore unknown filetypes (like Haml) unless reconfigured.

That said, git-grep can also mislead. It won't find results in new files before they've been added to Git, or in .gitignored files, and as mentioned, it only works in directories managed by Git. You can trade in some speed for removing these gotchas with the flags --untracked, --no-exclude-standard and --no-index.

I use project-wide search all the time. It's not just for search-and-replace, of course. 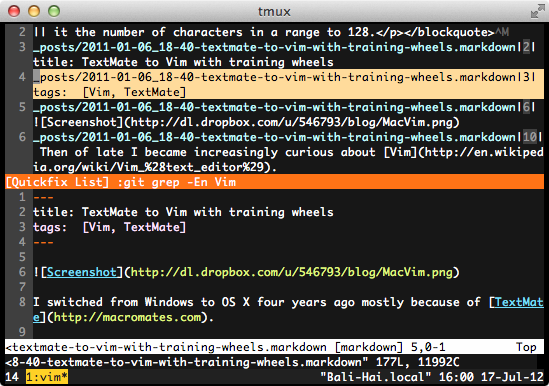 The search results end up in the quickfix window, a split window in Vim that you can move through like any Vim buffer. Hitting ⏎ will show the result from the current line.

There's a bunch of commands to open items from the quickfix list, without even needing to have it open (close it with :cclose).

Some of my favorite commands for the quickfix list are :colder and :cnewer, to revisit the previous or next item list. This means you can run one project search for "foo", notice some issue with bars, search for "bar", do stuff, then run :colder and you're back in the "foo" search. It's effectively a stack of project searches to pop and push at leisure.

Vim has a couple of commands like :bufdo and :windo, which let you run a command in every open buffer or window. Drew Neil (of Vimcasts and Practical Vim) with other contributors wrote a :Qargdo for when you want to run a command against every file in the quickfix list.

My fork of vim-qargs uses the conveniently short :Qdo for the same.

For project-wide search-and-replace, then, you would simply do something like this:

You probably want to configure

so each buffer is saved automatically when it moves to the next one. Otherwise, you could do:

The upside of separate steps

It is, of course, a bit inconvenient to repeat the search string. But because the syntax of git-grep (or some other tool) will often diverge from the Vim search syntax, I've settled for typing the search string twice rather than having it automatically reused.

While I would prefer to only type the search string once in the common case, there is an upside to having separate steps for the global find and the local search-and-replace, and that's flexibility.

You have your choice of global search tool, with their different features and trade-offs. The raw speed of git-grep in a Git repository is a wonderful thing. With :GitGrepAdd you can search for "x" in directory a plus "y" in directory b.

And on the other end, you get all the magic (or nomagic) of Vim. Though I don't think I've used it with :Qdo yet, you could apply some complex macro and not just a substitution.

One thing I have done is chain multiple substitutions (replace "a" with "b" if present and then "c" with "d" if present), which I think would be more difficult with a more convenient but less flexible setup.

I'm curious to hear what others use. Let me know!