My bank is Swedish ICA-banken (or "ICA banken", as they would have it - it's a Swedish grammar vs. marketing thing).

They're a fairly modern bank – even have an iPhone version.

I suggested to the bank that they add it, but they didn't want to, so I made it myself. 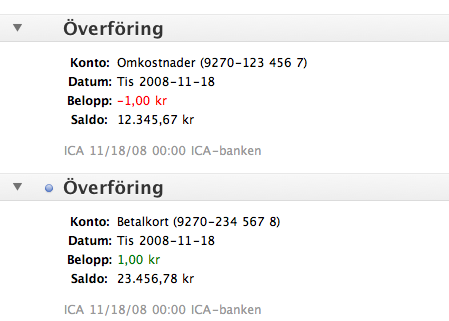 (The account numbers and balances in the screenshot are fake.)

I realize it will only be of use to customers of ICA-banken, but I thought I'd still share it for those few, and as inspirations for others. It should be fairly easy to adapt to any bank that offers read access without a hardware token or similar.

For your own privacy (since you shouldn't give your password to strangers), I don't offer a hosted version, but if you know your way around CGI scripts, set it up yourself: http://github.com/henrik/atomica

It's actually an Atom feed, not RSS, but any modern feed reader won't care.

Alas, I believe Google Reader still doesn't support HTTP authentication in feeds. Most desktop readers do, as does the online Bloglines (and it doesn't share authenticated feeds publicly, of course).