Grep in Project command for TextMate 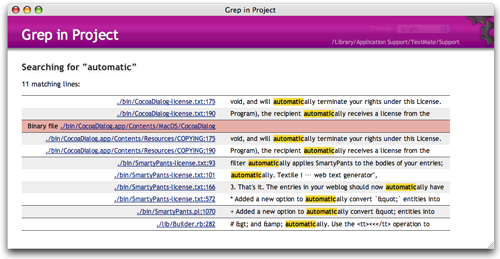 TextMate is an amazing editor, but its built-in "Find in Project" sucks. With larger projects, it's quite slow and will easily freeze the application for a good while.

grep is better, but switching to the command line gets annoying, and it lacks integration with TextMate – you can't jump straight to a matching document.

What it lacks in project search, TextMate makes up for in extensibility, though, so I wrote a "Grep in Project" command that combines the speed of grep with a decent, well-integrated UI.

The command is by default bound to ⇧⌘F, essentially replacing the built-in "Find in Project". You can still access it through the menus or by hitting the keyboard shortcut in a HTML output window, such as the "Grep in Project" window – or just change the shortcut, if it bothers you.

Some other defaults: fixed string search (not regexp), substring search (doesn't match words only), case-insensitive, ignores *.log files and anything in directories named .svn or vendor/rails. These are good defaults for me (mainly working with Ruby on Rails apps). If you don't like them, alter the command. If your needs vary wildly, make multiple copies of the command or extend it (I likely won't) to use a dialog with options.

Some other things to note:

Click a file path link to visit that file and line in TextMate. For binary files, the link will reveal the file (open the directory and select the file) in Finder.

I've spent quite a lot of time making this command work well for me, but if your needs are greater, or just different, please do modify to taste and feel free to share your work in the comments.

Now gets query from/writes query to the shared find clipboard. Thanks, Ciaran!

Web window automatically resizes to fit the results. Resizing web windows seems somewhat fragile, so it might not work all the time.