Fixing the flap pocket of the STM Small Alley

I recently got the STM Small Alley bag to use with my notebook. The bag I used previously was sort of falling apart, was a bit too rough inside for the MacBook (not a very rugged computer, though lovely in other ways) and also squeaked.

The Small Alley is great, but there are some small things about it I would want differently. I was a bit surprised to realize that physical items can actually be extended similar to software.

Many people, me included, take issue with the zippered compartment inside the flap. The inside of the flap is one big pocket. Combined with the facts that gravity pulls downwards and that the flap opens upwards, this means that things you put inside the flap slide all the way to its top when it's opened. Worse, they tend to want to stay there because the flap curves around the top of the bag.

I got about 20 centimeters of black, self-adhesive (on the back…) hook-and-loop fasteners (i.e. Velcro) and stuck these horizontally across the vertical middle of the pocket. I put the loops toward the bag body and the hooks toward the outside – my rationale was that as I'm more likely to leave the bag body-side down, gravity and momentum will pull stuff against the softer side rather than the rougher one. I doubt that it matters much. 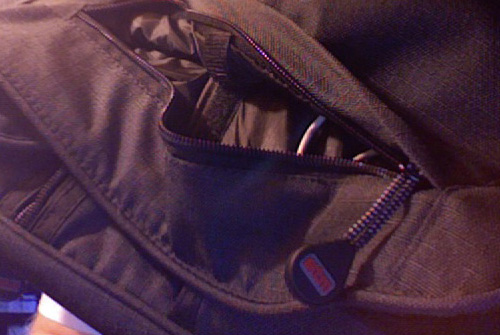 The obvious idea is that you can close off the pocket across the middle, so that stuff you put at the bottom can't travel further up than to the middle. Works a charm for me.

The fact that it's just hook-and-loop fasteners means that you can just tear it to fit something larger in the pocket.

Something I haven't tried, but that seems to make sense, is to instead or additionally put fasteners (or something more permanent) across the top of the pocket, only blocking off the very top, where things can get stuck.

There are some more things about the bag I want to adjust – most importantly adding pockets for cards (such as credit cards). Will blog when done.