Associate commenters with comments on Feber.se

I made my first userstyle: Feber.se associate commenters with comments.

Userstyles are like userscripts (Greasemonkey scripts) but for CSS rather than JavaScript. You can modify CSS with userscripts as well, but I assume a userstyle will have less overhead.

The point of this particular userstyle is to make it obvious who commented on what, on the various Feber.se sites.

Before applying the style, a commenter's name appears closer to the body of the previous comment than to its own comment text, causing confusion. After, whitespace is adjusted (according to Gestalt laws of proximity) and a colon inserted (suggesting that the name is associated with whatever follows): 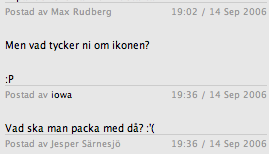 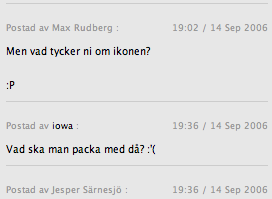